Sharon Langert, the woman behind Fashion-Isha.com, is one of the most incredible Jewish women I've ever met. And I say that without having actually met her. This crazy thing called the Internet has allowed me to connect with Jews all over the world, Sharon among them. Her site constantly inspires me and I genuinely look up to her. So when she asked me to do a guest post, it was like being asked if I want to go to Nordy's. Um, YEAH I do. One of my favorite things about this lady is that while she makes tznius look gorgeous day in, day out, she doesn't judge women who don't. Sharon has offered me encouragement and support when I've touched on the topic before, so I knew I could discuss what the idea of modesty has done for me, even if I'm not perfect at it (yet). Head over to the post and share your thoughts!

Why Princesses of Long Island Was a Kiddush Hashem. 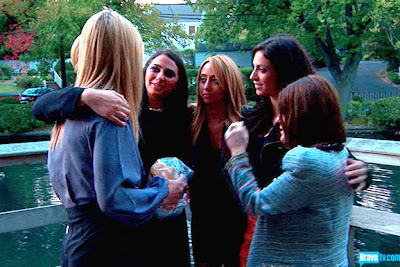 Please forgive my absence--my uncle passed on July 21st and I took much-needed time off to grapple with his impending death and then grieve him. We will miss him terribly, but it is a relief to know he's at peace and out of pain. I can't thank you enough for your prayers.

Given the title of this post, I'm sure there are a lot of challah rolls aimed at my head, but just hear me out. When the show first kicked off, I was as horrified as anyone. I think it would have been even harder for me to watch before my conversion--to see most of these girls think it's about how many Louis bags they own when I was dying to join the Jewish people. But as the season progressed, I noticed an emerging pattern: In the midst of the drama (of course there was drama) in each episode, Chanel, who identified herself as Modern Orthodox and was the most observant by far, was doing us proud. Before you launch into the laundry list of things she could have handled better, I think it's worth pointing out how few of us would look good under that much surveillance. As we go into Elul, there's a lot of talk about reviewing the last year, and I imagine seeing yourself on TV--all the ups, every single down--feels about the same as it would if G-d showed us everything He "caught on camera."

No, Chanel wasn't perfect, but what stood out to me was her constant willingness to reflect and improve. After an altercation at Amanda's White Party to launch her Drink Hanky (no comment), Chanel met with her Rabbi to admit she was not being her best self, chalking it up to the pressure of being "older" and unmarried in the Orthodox world. (And to any of the bloggers I saw dismissing her feelings throughout the season, you are either not Orthodox or not female. Trust me, that pressure is real--both socially, and because as Chanel gets closer to 30, her dating pool will increase in age quite dramatically. But that's another post for another day.) Chanel's Rabbi, by the way, was the only one we saw on the show, and not only did he not look or sound like a cliched Orthodox Rabbi, he dispensed some priceless advice that any woman could take to heart.

While the other ladies organized events around boats or fledgling businesses, Chanel brought them together for Shabbat dinner, her sister's big Jewish wedding, and a Rosh Hashanah ritual. She couldn't control the dramz that erupted before and during these occasions, but she also didn't revel in it. Rather than engage in lashon hora, Chanel encouraged both parties to speak directly to each other and make peace. I can't contrast her behavior with the others' without speaking lashon hora myself, but suffice it to say she proved an overall positive representation of Jewish women to viewers.

And that leads me to my point. None of the other girls or their families professed to be religious; some even mocked making a bracha over food. The one "Princess" who didn't reinforce negative stereotypes, the one you'd actually want to be friends with in real life, was the religious one. Bravo seemed to be aiming for a Jewish version of The Real Housewives of New Jersey: catfights and materialistic showing off with a little Yiddish sprinkled in. But Chanel didn't let them get away with that, because at the end of the day, Jewish culture is nothing without Judaism. Perhaps most impressively, she never let religion create a chasm between herself and the other girls or acted self-righteous. In the final episode, as she used Tashlich to heal an ongoing feud, she ended the season with the following (though I am paraphrasing) thoughts: "Not everyone is going to be BFFs here. But we are all Jewish women, and we have to come together. Our people have been through enough." Tell me that doesn't make you kvell.

If Season 2 continues to show Chanel acting as a leader, demonstrating what Jewish life is really all about, then count me in.